The first MADAS was designed by a German engineer, Erwin Jahnz. The machine was inspired by the Thomas Arithmometer. Several patents were filed in 1912 and 1913, describing improvements which were at the origin of the Madas, produced by the manufacturer H.W. Egli.

For the first time, a stepped-drum machine was able to complete a fully-automatic division, with continuous carriage movement, and had a quick-clearing mechanism. It was a great progress with regard to business competition. The patent written on the top panel of the machine is dated 1913, but it is not sure that the first machine was marketed in the same year. Some documents mention 1915 for the initial production. In any case, the year 1908 is often misquoted in literature and also by auction houses. 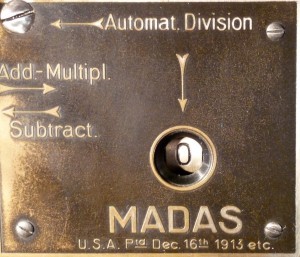 It is commonly accepted that there was a unique numbering system, merging all models of “Millionaire” and MADAS, starting with the first “Millionaire” of 1893. In all likelihood, the first serial number of a MADAS is around 3500.
The first generation consisted of machines with sliders for introducing the numbers. The early machines have a single lever for switching between Division and other kinds of operation. This was a weakness in terms of reliability. On the later versions, this lever was replaced by two distinct levers. 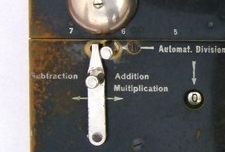 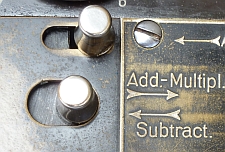 The VII MAX model (7x7x12) is the smallest of the MADAS range and also the most widespread machine. During this first period, H.W. Egli tried to make a machine of type 7x7x12 in a lightweight material (aluminium), but there was apparently no success. Therefore, the weight of a MADAS is between 12 and 25 kg.

From 1922, the various models were available with two main options, keyboard and motor. The first version of keyboard had small round keys, similar to those of the first “Millionaire”. The motor was placed at the back, with a protective cover. But the keyboard with small round keys was not very practical. A new design was made, with flat rectangular keys, probably in 1923. 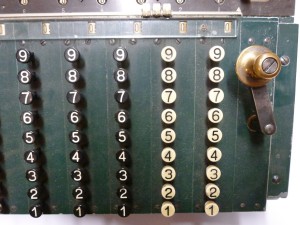 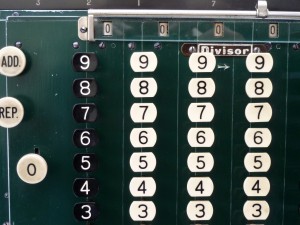 In 1927, two improvements were available, an additional small set of keys for entering the digits of the multiplier and a special key “DIV Stop”, on models with motor, in order to stop the Division before the end of operation. 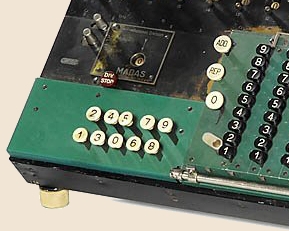 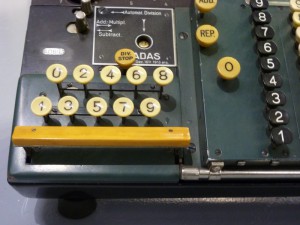 After 1930, a lengthening of the rear legs allowed a higher angle of inclination of the body, and the motor (a new faster model) was placed underneath instead of in the back. 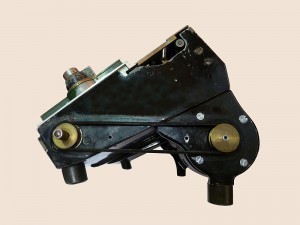 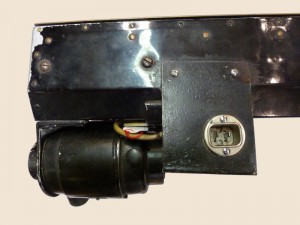 On all XI models, and IX models (on request), a device is fitted in the top (product) Register between the seventh and eighth digit to enable the register to be divided into two sections. This device is controlled by a small knob. When this knob is turned so that the white line is vertical, it enables individual products to be obtained in one section while the compound total of those can be accumulated in the other section simultaneously. 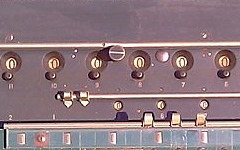