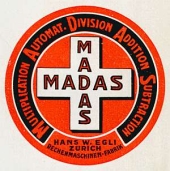 The Millionaire, point of departure of the firm Egli A.-G., was not, however, a small calculating machine, well-adjusted for office requirements. It was hardly transportable. A very simple model was 67 cm large and weighed 36 kg. More complex models, with electrical motor, were still much heavier. The most important model weighed 73 kg.

It became obvious, however, from 1908, that a new kind of machine, smaller and lighter, was a necessity. A new design was made for a calculating machine, centred on stepped drums (see technical section), in 1911. The mechanism is in the general style of the Thomas Arithmometer, with extensions developed by German engineer Erwin Jahnz living in Zuerich. Production of this machine began in 1914, known as “MADAS”. This acronym means “Multiplication – Automatic – Division – Addition – Subtraction”. A certain number of models appeared between 1914 and 1922. These models were less heavy than the Millionaire, but still pretty large to be carried. 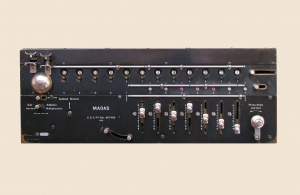 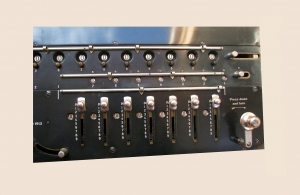 see details of this machine here
From 1922, the machines were constantly improved. 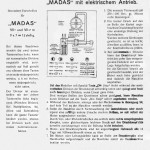 Here, you can see an old document, named “Start with operations”, in German, concerning the machines VIIt and VIIet. This document is dated from 1928 and the drawing is dated “Zuerich, June 27 1923”. 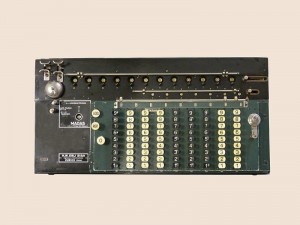 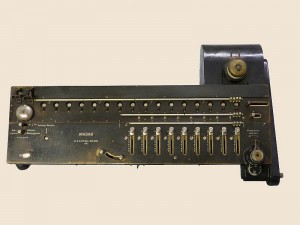 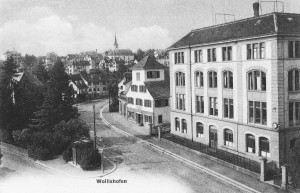 About 1930, the building where the factory was localized 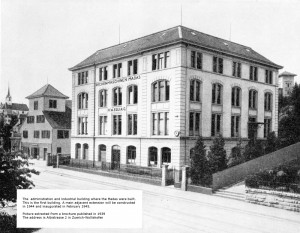 The first administrative and industrial building before 1939

It is only from 1931 that new designs of the MADAS have allowed the machine to be carried more easily. These new models, constantly improved until around 1960, were named “MADAS portable” (see Portfolio).

The “MADAS Portable” from 1931 was designed from the outset as a full-keyboard fully-automatic machine, building on Egli’s previous experience with the “Millionaire” and the early MADAS.

The A and (later) B series were 10-column machines with fully-automatic multiplication and division, including automatic carriage positioning and register clearing. A semi-automatic L series provided automatic division but deleted the automatic multiplier. The machines all used the same basic calculating mechanism, with various combinations of features including automatic division setup, back transfer, extended tens transfer, push-button carriage positioning, and a second accumulator register. Only the simplest models were available in hand-cranked versions.

At this time, we see the arrival of a new logo which highlights, in an emblem, the mechanism of stepped drums. Generally, the emblem is held by a lion. As a matter of fact, this emblem is a version of the Zuerich city’s emblem. 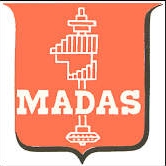 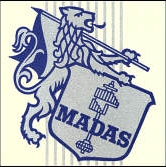 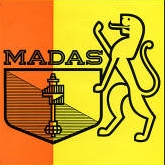 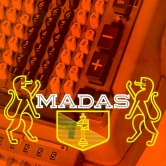