The Great War 1914-18 had a serious impact on economy, everywhere in Europe, although Switzerland had been a little spared. We assisted to the disruption and reorganization of all economic sectors and production systems. After the end of the war, there was no money, social troubles appeared, and the need for cereals overpasses the need for calculating machines. A sixth of the Swiss population is considered as extremely poor. Working conditions get disastrous. The government decides to suspend laws protecting workers in factories against exploitation. We must wait for the year 1919 in order to get a new law limiting the hours of work within a week to 48 hours instead of 59.

In 1918, the Swiss government decides to call army in the city of Zuerich to avoid a revolution, causing a general strike, counting 250’000 workers. The country was ready to plunge into civil war and chaos. The company H.W. Egli A.G. got through this period without too much trouble, even if 1918 remains the year having produced the smallest number of machines. The following years, however, were not easy. The firm had to cope with strikes in 1922, because of employment and salary’s reduction.

After the death of H.W. Egli, in 1925, the new CEO was an engineer, old friend of H.W Egli, Mr. Oscar Bannwart. H.W. Egli’s wife remained as President of the Board until 1970 when the company was liquidated. His son Friedrich got also special powers. Mr. Bannwart brought much money to ease the restart of production. He remained at the top of the company until 1944 and died in 1946. His son, Herbert Bannwart-Mousson took over the leadership from 1944 until 1969, together with the new Director Friedrich Egli.

After the success of the new “MADAS portable”, the factory became too small to meet the increasing demand. Moreover, in 1927, the firm bought patents concerning the machines invented by the Norwegian engineer M. Frederik Rosing BULL. These “tabulating machines” were produced in the workshop of Zuerich between 1928 and 1930. In 1931, the production was stopped in Zuerich and a new brand was created for production in Paris, with name “H.W. Egli-Bull”.

In 1945, the engineering workshop was transformed thanks to an extension of the existing building, at the corner of “Albistrasse 2” and “Seestrasse 356”. An additional floor was built. In the late 40’s, about 300 persons worked in the factory, with only two persons in the secretarial department. The building’s design was modern and well-suited for the purpose of the firm. The last floor was more specifically dedicated to apprentice training, with workshops in a quiet and brightly lit environment. 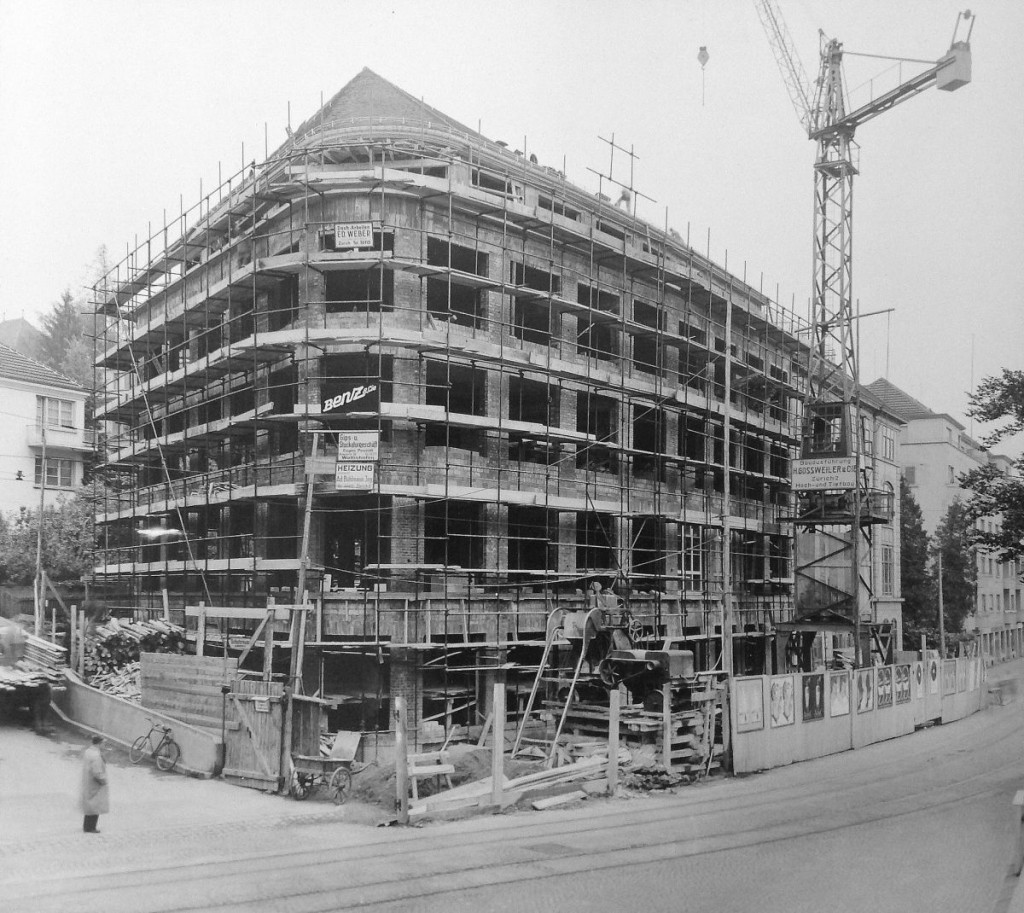 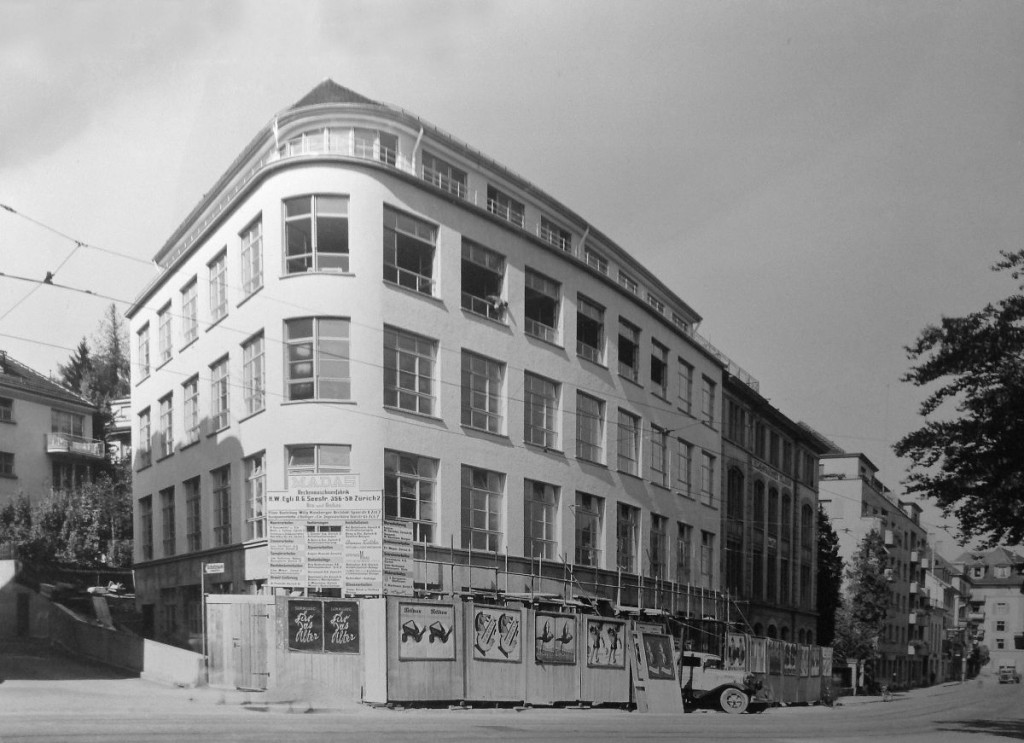 The extension right next to the old building 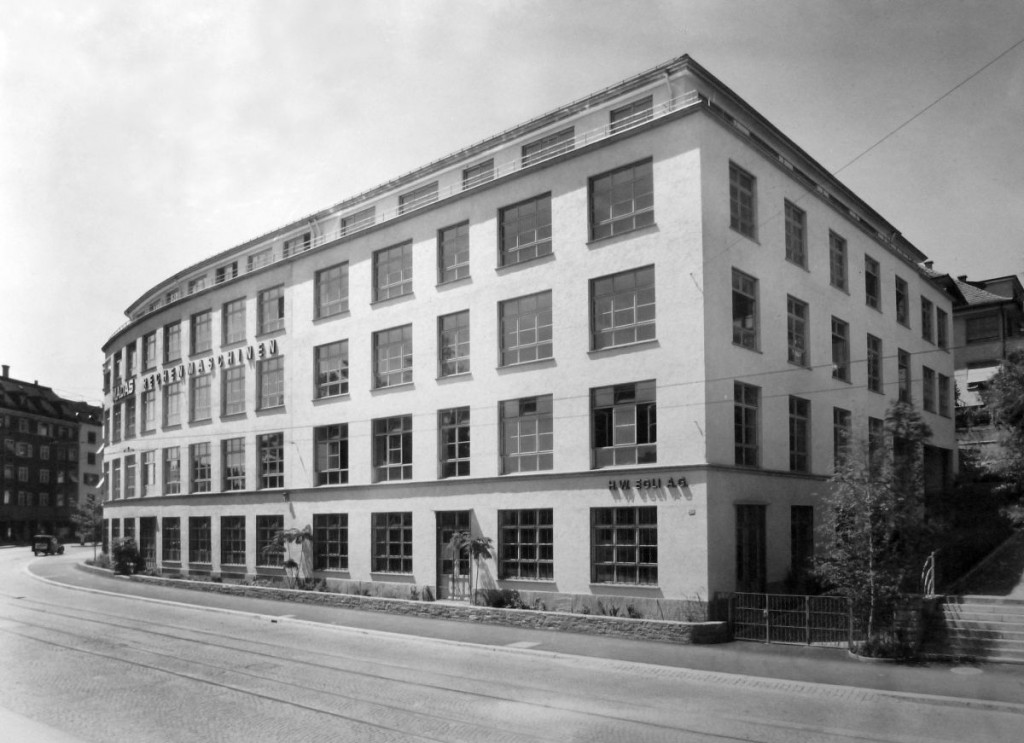 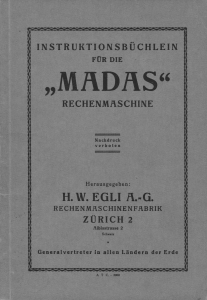 This operation manual testifies to the marketing style of this period, while the last line on this cover page says: “General dealer for all countries on earth”. 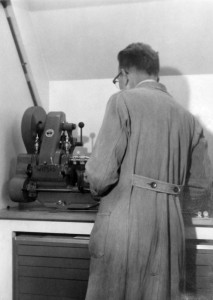 All mechanical adjustments required particular skills, like in the watch industry. Perfection was required. If a piece was badly done, it could not be repaired and it was a loss in term of raw material.
Between 1940 and 1960, the success of the “MADAS portable” was never disclaimed. Continuous improvements were brought which ended up on a very sophisticated machine, the 20BTZG model. 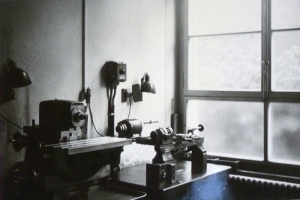 In the 1940s, a place in the manufacturing shop
After 1931, the “MADAS” progressed constantly. Many patents were registered and about ten models, more and more complicated, were produced (see the portfolio). The most important models were not inexpensive, but it was an affordable price for many companies and civil Services. In spite of its complexity, the “MADAS” had a “small” size and a small weight, proving the term of “portable” 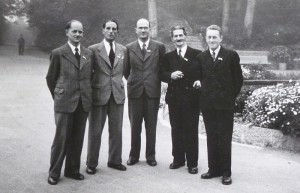 Senior management team of the R&D Department.
To the right, M. Oscar Golder, who was the leader of the Research department from 1933 until 1969. 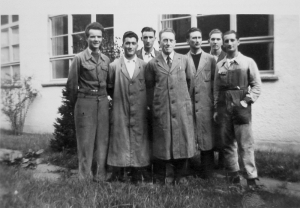