The period between 1930 and 1935 corresponds to the birth of “tabulating machines”. These machines, using punch cards, had to compute and print results. IBM worked hard on this concept, but the models developed by Bull-Egli kept a technical advantage until 1949. The starting point of the trend towards “tabulating machines” is the T.30 produced in 1931 by H.W. Egli-Bull. 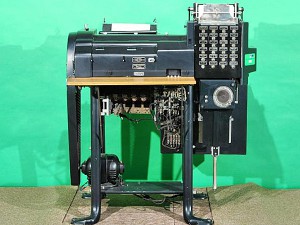 To be properly adapted to the needs of commerce, the machines needed the capability to produce a printed record showing each of the quantities in the computation, and the total itself, on a strip of paper. The human operator could then not only check that the correct numbers had been used, but also keep the print-out as a permanent record. Most certainly, the firm Egli failed to go in that direction.

Around 1950, competition became harder on the market of calculating machines. In Europe, the establishment, in 1949, of Olivetti-Bull joint venture between “Compagnie des machines Bull” and Olivetti, to market Bull’s card equipment, is to be seen as the start of a transition. Between 1950 and 1955, more and more companies tend to buy “tabulating machines” in replacement of old electromechanical calculators. Development is extremely fast, with several competitors like IBM, Bull-Olivetti, Remington-Rand, Honeywell-Bull, and NCR.

From 1955, the need for the “MADAS” decreases, but there is still a solid demand. It seems that, in the 1950’s, the success of the MADAS was a cause for a lack of overall view for future prospects. For example, a new prototype was developed by Mr. Oscar Golder, in this period, but the existing models were still enough required. So the project did not succeed. Three or four years later, Olivetti had a machine able not only to calculate but also to print. It was the swansong. 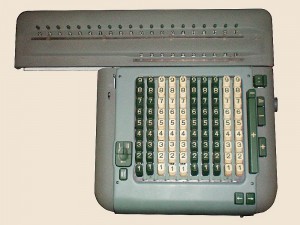 Prototype of a new model including square root calculation. This prototype had been designed by the development team-leader, Mr. Oscar Golder.

Definitely, the main competitor, which precipitated the loss of H.W. Egli, was the Japanese electronics industry, as well as the company Olivetti. In this ever-changing phase, Olivetti had exceptional production increases. Between 1960 and 1962, production increased by 124.4 %. The increase was particularly substantial for calculating machines (+ 40.8%). Sales were very high in Switzerland, Belgium, Portugal and above all in France. Moreover, Olivetti stayed one step ahead of competition, for electronics. In 1959, the ELEA 9003 was completed: this was the first commercial computer to be made entirely with transistors. H. W. Egli, which had failed to take the turn of electronics, was destined to die.

After 1960, fewer and fewer “MADAS” were produced. In 1970, the firm H.W. Egli stopped all activity. During the two or three years before 1970, a little production was made. Selling was made above all on the basis of existing inventory.

The building still exists, at the address “Seestrasse 356”, Zuerich. 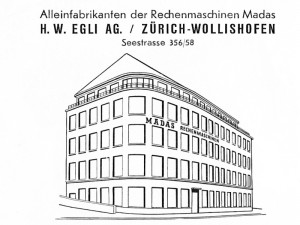 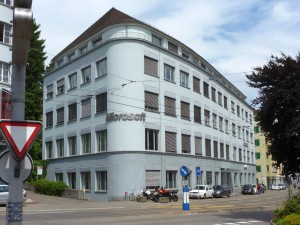 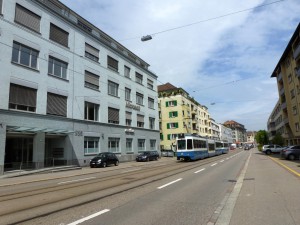